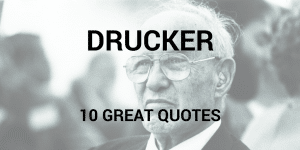 Peter Drucker and Robert Greenleaf had known each other for many years before Greenleaf published The Servant as Leader in 1970.

The two men taught together when Greenleaf led the “Bell Humanities Program” – an innovative, multidisciplinary executive education program at AT&T during the 1950’s.

As Drucker and Greenleaf collaborated professionally, they became good friends. Bob and Esther Greenleaf enjoyed spending time with Peter and Doris Drucker when they were neighbors in New Jersey.

Drucker was a man who chose his words carefully.* So it is no doubt with care that Drucker once called Greenleaf “the wisest man I ever met.”

In celebration of their friendship, here are 10 great quotes from Greenleaf’s friend, Drucker.

Do any of these quotes resonate with you specially? Are there other Drucker quotes you would add?

As always, we appreciate your views. Thanks!

* Remember not to describe Drucker as a guru: “I have been saying for many years, that we are using the word ‘guru’ only because ‘charlatan’ is too long to fit into a headline.” – Peter Drucker